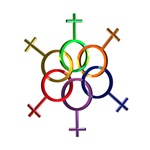 I am a trans(gender/sexual) woman, having belatedly begun my transition from male to female in 2000.

At least from early adulthood I felt I was "different" in terms of gender, but only in middle age did I find sufficient courage to begin making the changes needed for me to feel at home in society and with my own body. I started with a name change and changes in presentation, and later began hormonal therapy. I underwent genital surgery in 2008, allowing me to change my sex/gender on governmental documents to female.

I was featured in:

I'm on Mastodon as @fullyabstract@fosstodon.org.